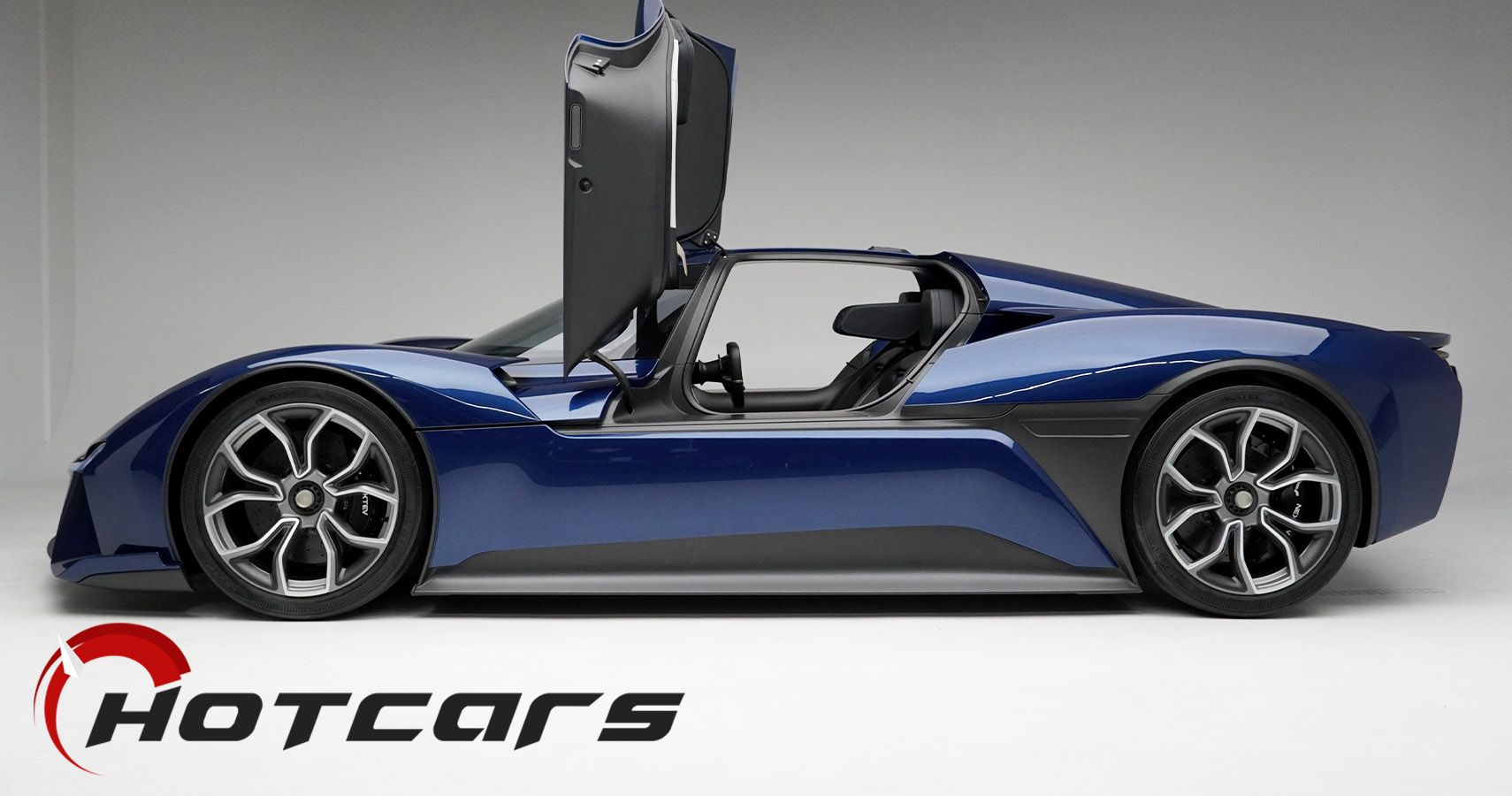 At the official reveal of the Petersen Automotive Museum’s new supercar exhibit, the only car I didn’t immediately recognize was the Nio EP9. Low and wide, with an decidedly futuristic exterior featuring plenty of carbon fiber and a massive rear diffuser, the EP9 looked like an all-new supercar from a brand that I figured simply made an announcement that I missed somewhere along the way.

But the nearby Petersen board revealed that the EP9 debuted in 2016 and set out to set world records for all-electric lap times at the Circuit of the Americas, including while driving itself.

Fortunately, Petersen recently pulled the EP9 off the show for a media day, allowing me to get up close and personal with this record-breaking pre-electric supercar for a whole line of Nio electric cars that might, one day, hit the market here in the States.

The EP9’s design remains contemporary thanks to elegant design details such as hooded headlights, angular air intakes and plenty of strong definition at the front and rear wheels. These air intakes may appear to indicate that the supercar is using an internal combustion engine, although each wheel actually receives power from a single electric motor that produces up to 250 kilowatts (or about 335 horsepower) for a total four-wheel output of 1,341 horse. The entire EP9 weighs 3,825 pounds, of which 1,400 pounds are made from batteries that allow for an electric range of 265 miles.

Nio is different from most other electric car makers, by how it recharges its cars. The company that originally appeared as NextEV already makes batteries that can be easily removed and reinstalled — meaning battery swaps can replace long charging times. The process takes less than five minutes at more than 700 battery exchange sites installed along busy roads in China. Nio also recently expanded into Norway as a first step in a comprehensive plan to bring electric cars to Europe, where manufacturers face regulations and chargers similar to those in China.

The manufacturer formerly known as NextEV

The EP9 first appeared in public when Nio was still using the NextEV moniker, so vehicle details like calipers and tires still show the original company name. The rebranding to Nio a few years later, along with the company’s logo, refers to founder William Li’s goal of creating a new blue sky by replacing internal combustion vehicles with cleaner, more sustainable electric vehicles. As Nio’s Director of Communications JoAnn Yamani told me, Lee stood holding his son as he peered into the polluted Beijing air and realized global change had to come more quickly, so he put the billions he earned as founder of Bitauto into a new venture that eventually evolved into Nio – but Nio doesn’t limit this vision to electric cars entirely, instead offering a wide range of lifestyle products in China from café-equipped homes, conference rooms and libraries to gyms and even basketball clubs.

Related: What we know about the Lexus electric supercar

Racecar as proof of concept

The Nio EP9 debuted as a proof of concept for a brand new futuristic electric vehicle. The four-engine design allowed for massive power and incredible performance, around the same time as the Rimac Concept One and long before similar engineering for upcoming supercars like the Lotus Eviga. Nio’s efforts in Formula E racing, as well as the gentle nudge from (now deceased) engineer Martin Leach, helped Lee realize that the sports car would draw attention to a new company that no other passenger model does.

Today, Nio produces several sedans and crossovers under alphanumeric designations, including ES8, ES6, ET5, ET7 and EC6 – more models will be released soon, while Nio will also begin to deliver existing products to new markets, such as the thriving ET7. to Germany later 2022 with features like the EP9’s derived steering wheel, interactive Dolby Atmos surround sound, and emotion-sensing Nomi AI.

RELATED: 10 Supercars And All-Electric Hypercars Most People Haven’t Heard Of

Design for a new era

All other Nio models continue to improve on the design language created by EP9. David Hilton, former chief design director of Nio, who has since moved to Karma Automotive in California, penned the EP9’s smooth, functional exterior. Flowing lines avoid any awkward design, and instead contribute to a sleek aerodynamic profile and help create a sense of presence and simplicity that many other electric vehicles fail to capture.

RELATED: These were the 10 best electric sports cars of 2021

Sealed in a purpose-built interior

The interior features carbon fiber for nearly every surface, including the floor, dash and Formula E-derived steering wheel (which Tesla probably should have studied before moving on to the controversial yoke design). Four small rectangular screens that may look small compared to other new electric vehicles like the Mercedes-Benz EQS – but this is a street racing car, remember?

As such, the small pads in the compact carbon-fiber bucket seats provide a modicum of comfort, although the car didn’t feel cramped when it snapped into place at 6’1″ (with long legs), even if climbing required the car’s flexibility Serious, where the racing car’s heel sill helps the driver stand up against G-forces, while two large pedals hint at two-foot driving as the name of the game here.

RELATED: What You Didn’t Know About Mate Rimac and Its Electric Supercars

Preparing for the future of autonomy

Five-point racing belts instead of the traditional three-point seat belts hint at the EP9’s racing heritage, although early investors with 16 built models could drive them on public streets in some countries around the world (not just the United States, because Batteries are not combined). Padding near the headrest will keep the helmets in place, while the driver-passenger camera setup is just one of many devices throughout the vehicle that allow for fully autonomous driving. Nio hopes to pioneer other technology for passenger cars, including capacitive touch surfaces built from a rattan-based material called Karuun, as well as hand waves to roll windows – not just on model cars, but also on the ET7 range for sale in Germany .

Even surrounded by some of the world’s toughest supercars, the Nio EP9 looks wider and taller than the rest. I measured in person and can confirm official dimensions are 88 inches wide (for both front and rear tracks) and 190 inches long. It also rides low at 45 inches. Pictures in a white room simply don’t do the overall size justice – the interior space despite the large carbon sills should hint at the absolute presence of the EP9’s commands in person.

When touring the EP9, the purpose-built racing car features just as much. The racing slicks are 295mm wide (four square tires, as one would expect from a four-engined car) and massive air blows from the front of the EP9 through ducts deep under the chassis almost like an Aston Martin Valkyrie. Nio won his first Formula E drivers championship and continues to compete today, remaining an official factory despite selling the team to Lisheng Racing in 2019.

Nio’s Formula E team will return to the US in 2022, but don’t expect to see any EP9 supercars on American streets anytime soon – the car on display at Petersen doesn’t currently have batteries installed because the packaging is still illegal on these beaches. But anytime I asked Yamani about plans to expand the Nio brand to the US market, she shyly replied, “Stay tuned.” It provoked a potential EP9 homologation with more concessions for street driving. And with the conquest of Europe continuing, as well as the fact that Nio’s research and development department is located in San Jose, California, the time may arrive when Americans can buy the EP9’s successor sooner rather than later.

Surrounded by car culture in Los Angeles, Michael Van Runkel grew up going to enthusiastic small get-togethers and massive industry shows. He learned to drive a stick shift in a 1948 Chevy pickup without first gear and is currently exporting his 1998 Mitsubishi Montero while daydreaming about finishing that Porsche 914 project one day. He has written in various media since graduating from UC Berkeley in 2010 and started HotCars in February 2018.